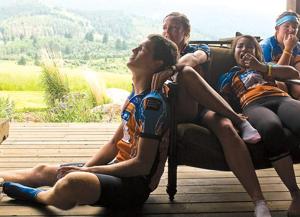 Peter Bouck gets a massage from fellow Texas 4000 rider Abby O’Connor while riders Amy Ngyun and M.J. Bollinger, right, look on. The cyclists made their way from West Yellowstone to Bozeman on Saturday and were welcomed with food, drinks, warm showers and places to rest by Triple Tree residents. The team will continue to Helena Sunday morning.

The kind of gumption it takes to spend three hot summer months riding a bicycle 4,000 miles across mountains, deserts and forests is, to say the least, uncommon.

But to the 41 or so members of Texas 4000, all students at the University of Texas in Austin, the challenge, pain and sometimes even grueling misery of the trip is worth it.

Texas 4000 is a nonprofit group dedicated to raising money for cancer research and prevention.

The riders started their journey from in Austin on June 7. They split into two groups, one of which will follow a route through the Rocky Mountain States, the other a route along the West Coast.

The goal of both groups is to arrive in Sutton, Alaska, more than 200 miles north of Anchorage, in mid-August.

The 25-strong Rocky Mountain riders passed through Bozeman on Saturday, with many of them spending the night at the Triple Tree home of a local couple, John and Vickie Wilkinson, whose own tragic experiences with cancer moved them to open their home and their hearts to the group.

NOT ONCE, BUT TWICE

The couple’s oldest daughter, Susan Dennison, died of cancer in 2004 at age 42.

“They think it was colon cancer, but it got into her pelvic wall,” John said.

While doctors diagnosed – and misdiagnosed – her daughter’s cancer, it spread out of control, Vickie said.

“They misdiagnosed her four or five times,” she said. “By the time they figured out it was cancer, they didn’t really know where it came from.”

“Cancer has really impacted us,” John said. “I think a lot of families have been, too, but for us it all just came at the same time.”

The couple has two other children, Carolyn, 44, who lives in Beaverton, Ore., and Sarah, 26, who lives in Austin, Texas, and nine grandchildren.

But the loss of their daughter and their son’s illness have given them a real desire to help other families waging battles against cancer. They support cancer research and prevention efforts. And they support groups like the Texas 4000.

“When Susan died, it was like, well, this will never happen again,” Vickie said. “But now I can’t imagine there’s a family out there that hasn’t been touched by cancer in some way, whether it’s a family member, or a friend or someone they know.”

In 2006, when the couple’s niece, Susan Clapsaddle, then a student at the University of Texas, called to say she was joining that year’s Texas 4000, and making the 4,000-mile trek with more than 20 other committed riders, John and Vickie jumped at the chance to help.

They opened their home to the group as it passed though Bozeman, giving the mostly college-aged bicyclists a place to sleep, a hot meal and a chance to wash their clothes.

“We had 22 kids sleeping here,” John said. “They were everywhere. We had them out on the deck and in my office and everywhere else.”

Now, the couple’s neighbors, and other Bozeman residents, also help out, offering space for riders – exhausted from daily rides of anywhere from 34 to 108 miles – to sleep and get a decent dinner and a hearty breakfast before they take off on the next leg of their journey to Helena.

“For me, it’s just that we’ve had so much experience with cancer in our family, the least we can do is help in this small way,” Vickie said.

Saturday’s menu included lots of hot roast-beef sandwiches, baked potatoes and as much salad as any hungry road-biker could digest.

“We just try to have a great meal and give them a lot of food, because they’re averaging 90 miles a day, and doing that you can work up a pretty good appetite,” Vickie said.

Along their 4,000-mile journey, the bikers spend time at every stop to make presentations, distribute literature and offer in-depth information on cancer, treatment and prevention.

They also raise $4,000 each, a dollar for each mile of the trip, to be used to support cancer research. So far in 2008, the group has raised more than $254,000. Over the past five years, it has raised $1.1 million for cancer research, according to the group’s Web site.

“I was a businessman, and the money they raise is important to me,” John said. “I was just thrilled that they raised a quarter-million dollars every year with this event. I think it’s a real character-building type of thing for each of them personally, and good work for all of them as a whole.”

Many of the riders are motivated by their own brushes with cancer, John said.

“You hear a lot of stories like that from them,” he added.

Vickie said the dedication and motivation displayed by the riders is truly moving.

“They could be out doing so many other things with their summer,” Vickie said. “But they seem to enjoy it.”