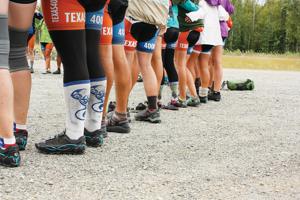 WASILLA – If there was any doubt that “everything is bigger in Texas,” the annual ride from Austin to Anchorage certainly challenges that doubt.

The ride is the longest cycling venture for cancer in the United States. On Thursday, Aug. 7, 79 Texans rolled into the Valley to stay the night at Wasilla Christian Church on day 69 of their 70-day trip. The following morning was an emotional one as riders prepared for the final leg of their cross-continent adventure by individually stating whom they were riding for, be it victims, survivors or family members and friends who supported them in their 10-week journey.

“(The training) is definitely important, but certainly the reason everyone is here is for cancer,” said Development and Program Coordinator Kathryn Flowers.

After applying and being accepted as members of the Texas 4000, University of Texas at Austin undergraduate and graduate students undergo 18 months of training in cycling, leadership development and giving presentations to help create awareness about the effects of cancer and ways to prevent it. Riders must raise a minimum of $4,500 each, log a minimum of 1,500 miles biked and complete at least 50 hours of community or volunteer service prior to departure from Austin.

Flowers said they usually receive about 300 applications yearly and only about 100 are accepted. Students are only allowed to participate as a rider once, but many, like Flowers, choose to stay with the program in one way or another.

“I always had it in the back of my mind as something I wanted to do,” Flowers said, “but I don’t think I knew at the time (I joined) what I was getting into.”

That much is true, she said, as she set aside her goal of becoming a theatrical stage manager to work for Texas 4000 full-time.

“It changes everybody’s lives but I’m the only one I know of who actually changed their career,” she said.
Flowers completed the ride in 2010, dedicating it to a young woman named Emily Hunner who was diagnosed with bone cancer their freshman year of high school. Hunner lost her arm to the disease in the process and eventually her life before she was able to graduate.

“She was the first person that made me realize I could get (cancer),” Flowers said.

Flower’s grandfather also succumbed to melanoma last year. Stories like this, she said, more than the epically long biking adventure, are why people join Texas 4000.

Pastor Dan Grisham has been hosting Texas 4000 members with his family for the past seven years, first at their previous location in Sutton, then last year in Palmer and this year at Wasilla Christian Church.

“For the first three years (our reasoning) was, ‘yeah, sure, why not help raise money for cancer?’” he said. “It became more personal and made more of an impact, became something I didn’t want to let go of, when cancer took my wife in 2010.”

Now, pastor Grisham’s daughter Miriam said, the dedication of the riders just means that much more.

“There’s a different group of people every year but they’re all just amazing people,” she said. “They give up their whole summer for this.”

Miriam’s husband, Justin, is also a cancer survivor, and said he would do the ride “if he could.”

According to Flowers, Chris and Mandy Condit founded Texas 4000 in 2004, after being inspired by 4K for Cancer, a coast-to-coast ride that started in 2001. Chris was diagnosed with lymphoma at age 11, but has since been labeled a survivor.

Being Texans, Flowers said, the Condits had to go bigger, and the ride to Alaska was the longest they could make from their home state. Now, there are three routes to Alaska, which pass through the Ozark Mountains, the Rockies and the Sierras before all the teams meet up in Whitehorse.

This year’s crew has raised more money than any group in the nine years before them on both an individual and collective basis, totaling over $602,000. It was also the largest group so far who completed the ride, Flowers said.

Seth Snyder, a graduate student at UT originally from Colorado, was one of the assistant ride directors for the Rockies team this year, meaning he had some previous cycling experience. He also was a competitive wrestler, golfer and tennis player in high school and participated in “pretty much every intramural there is” at UT.

But again, his fitness had little to do with his interest in Texas 4000.

“Once my grandma was diagnosed with uterine cancer I started to look into things,” Snyder said.

Snyder was soon training new riders every Saturday, having to make up his own training schedule during the week.

With the extra responsibilities of weekly meetings with ride directors and program administrators, as well as undergoing safety and preparedness training, Texas 4000 was a huge time commitment for him. It was all worth it, however, on day 59 when Snyder got a call that his grandma was diagnosed cancer free.

Nichelle Newman, soon to be a junior at UT, also started her training for Texas 4000 fighting for a close relative with cancer at the time – her father – but he passed away from prostate cancer just a few months before the beginning of the ride.

Newman had been an avid cyclist in elementary school, calling her father her “partner in crime” for mountain biking, as he encouraged her to enter races and stick with the sport through high school. The loss of him was – and is – difficult for her, of course, but as she made her way closer to Wasilla on day 69, Newman said she found a little bit of peace.

“Today was my moment,” she said. “This whole summer I wasn’t sure if I was healing at all, but today I was climbing a hill and I just thought, ‘Alaska is so beautiful.’”

The realization, she said, somehow helped her heal, and encouraged her to be content “in the moment.”

“I think being happy in any experience is going to be a lot easier (for me) than ever before,” she said.

Ozarks Travel Chair Vanessa Beltrand said her favorite moment was actually the first day, when they visited the oncology ward at the Texas Children’s Hospital and the MD Anderson Children’s Cancer Center in Houston.

“It was the best possible way we could have started the ride,” she said. “We were exhausted in a different way. It was a very grounding moment, and on such an important day and in an important city.”

The other type of exhaustion – that of biking for over two months straight – was soon just as present, however, especially since Beltrand “hadn’t touched” a bike in almost a decade.

“I can’t even explain how hard it was just to get up every day,” she said, “but it was worth it every time I would get on the bike.”

Beltrand hopes to continue the fight against cancer after the ride by putting her knowledge from her Nutrition major at UT to use in educating her community about preventative lifestyles and diets.

Kevin Helgren, a Neuroscience and Psychology major from Austin also intends to tie in his Texas 4000 experience with the rest of his education at UT, as some of the money raised from the program goes directly into biomedical engineering research at the university, with which Helgren is involved. Helgren dedicated his ride to his grandpa Kenny, who lost his battle to a rare form of blood cancer in 2011.