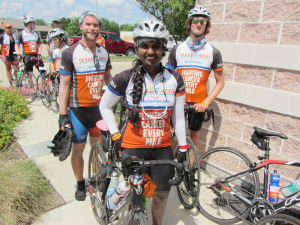 TEMPLE — Raising funds and promoting cancer awareness, a team of 27 cyclists with Texas 4000 camped out in the city’s Summit Recreation Center on Sunday.

Originally starting from Austin, and bound for Anchorage, Alaska, they were scheduled to depart for College Station at 7 a.m. today.

Ross McGarity, assistant ride director, said their route will swing through Houston before heading for the Midwest. One reason for that is so they can visit the MD Anderson Cancer Center, which is one of the research groups that Texas 4000 supports.

In the past 10 years, the young cyclists raised $4.5 million, he said.

“At the end of our summer we have a committee that will help select where we’re going to send our grants,” McGarity said. “We personally feel there’s a lot of hope.”

All of the Texas 4000 riders are students at the University of Texas.

“Freshmen don’t ride, because there is an 18-month training program that includes wilderness training and what to do if you encounter a bear. Every year, it’s a new group of riders,” McGarity said, “sophomores, juniors, seniors and a few graduates.”

A lot of the riders have barely ridden a bike before, he said.

“We’re just a bunch of people who really care about the fight against cancer. Most of the riders have been affected by the disease,” he said.

The 70-day journey is sometimes hard, McGarity said, but they do it to spread hope, knowledge and charity.

Whenever it gets hard, that is what’s going to bring hope to other people hearing about it, he said. It’s a physical test, not the same as cancer, but it seems insurmountable.

“I see my experience with my dad’s cancer as a way to give other people strength and hope,” she said.

This year, there are three teams on three different routes: the Rockies, the Sierras and the Ozarks.

They split up Sunday morning in Lampasas, with the Ozarks coming to Temple.

Laursen said it was sad to see the other teams go, but she knew they’d be fighting cancer in other places.

Ashley Wallace, a graduate student in accounting, said Sunday was exciting because it was their first day with their specific ride group.

“I have a lot of motivation about what we’re doing,” she said. “I’ve had two really close connections with cancer.”

“She’s a true inspiration to me,” Wallace said. “She said to me, ‘Don’t ever be sad. Don’t mourn my death, but celebrate the life we had together.’

“It’s pretty amazing that she enabled me to see that at 7 years old,” she added, “and it’s my outlook today.”

Blogs by the riders are at www.Texas4000.org.