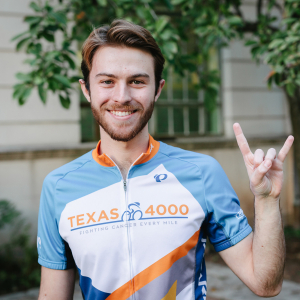 On April 27, Phillip Woolley, Ride Director for the Sierra Route, addressed his teammates. We believe all of our supporters should hear what he had to say. Below if the full text of his speech.

You might be wondering “Phillip, I know Hope, Knowledge, and Charity, those are our three pillars!” And, well, you’d be right, they are indeed the values that we try our best to emphasize above all else. The reason that I threw these up here and the reason that Hope is larger than the others is that I wanted to finish up our weekly RD update with a few personal words about Hope, which seems to be the most neglected of the three pillars as of late, albeit understandably so at that. I suppose to preface this, for some time now I wasn’t sure if I wanted to do a talk like this, I wasn’t sure if I had the right words to say or if what words I did have might come across as overly and overtly optimistic. But after mulling it over, I firmly believe that now is not only the most appropriate time to speak about and praise hope, but that quite frankly I don’t believe that we as your Ride Directors and peer leaders have done an adequate enough job at trying to salvage it in recent memory, so I’d like to apologize for that firstly.

I know that over the past few weeks many here might have felt scared, or anxious, or otherwise full of doubt, whether in themselves, the situation, or in our chances of making the summer happen, and it would be incredibly remiss of me to deny that I have also felt those same feelings over these past many weeks of quarantine. In fact, it’s important to acknowledge that everyone in this organization, staff, riders, leadership, has felt that at least one time or another recently. I also think important to acknowledge that given the subject matter of hope and the circumstances under which its being brought up, some may find no solace in these words, and that’s okay, but part of what’s changed my own attitude towards our current situation has been that I began to see the true value in having hope, and if what worked for me resonates with even only one of you, than to me it was worth bringing up all the same.

Just to lay things out there, it could be viewed as a tragic twist of fate that we should suffer so much fear and doubt over that which we have so little control over, and yet we find ourselves there, nonetheless. There is admittedly much that is decided for us going forward and being forced to give up much of our power and command over the near future was at first petrifying to come to terms with as one of your Ride Directors. In retrospect I was overwhelmed with discouragement when the first stay at home orders were made, and I know I wasn’t the only one to share in that sentiment. And in that moment, I quite frankly lost hope almost in its entirety. After all, through discouraged eyes hope may wear a bit of an imprudent or mocking face, something that may be well intentioned but perhaps lacking in the root of reality. It is true that hope cannot foresee what the future holds and having it alone won’t change the fate of our team entire. And yet, under more normal circumstances we would make it our mission to treat hope as that which we would plead that others hold on to and never forget. So, what then is the purpose of hope, and why do we make it our mission to spread it?

What semblance of a conclusion that I ultimately arrived at is that hope is the intangible drive that keeps us going. It’s the gut feeling that picks you back up through every failure and setback you face in life. It’s the thing that makes perseverance through difficult times second nature, not because you ever truly know for certain what WILL happen, but because you never want to stop fighting for what COULD happen. And for those who suffer from cancer, hope could be the thing that makes waking up every morning that much easier, because it reminds them that through all the pain that there is still so much good left in the world, goodness that’s worth fighting onto life to see. For us, hope can feed our spirits that have been sorely dampened as of late, enough so that even if the outcome is’t what we had in mind, that we will still gladly carry with us the fight and drive we’ve had for so long to do good, and carry it long past when our time in T4K has concluded. For the sake of hyperbole, hope can be the reminder that even if there’s a 1% chance of the summer happening that we will still train as if it starts tomorrow, to fulfill the promise we’ve made to so many, including to ourselves, that we won’t give up, and that Texas 4000 is above all else a sacrifice we’ve made to do everything we can to help a community most deserving. The way I see it, T4K is based on the principle that bad things happen to good people. Nobody deserves cancer just as we didn’t deserve to have this happen to us. But T4K is also based on the notion that as long as it’s within our power to do good then we will do exactly that. And despite all that this pandemic has struck from us, there is one power that we still yield that can never be taken away from us, and that’s the decision of what to do with the time that is given to us as individuals. Do we keep looking towards the future with hope, and work with what we’ve been given to make this summer a reality, or do we forsaken hope entirely and give up?

I suppose I ask that in times like these, which are to many of us endlessly dark and disheartening, that we do our best to not turn towards despair and hopelessness, because the way I see it, those are for people who see the current state of things as an absolute, as if it’s somehow a guarantee and inevitability that the summer we have awaited eagerly in anticipation for will go up in smoke and never see the light of day. But times like these don’t favor certainty, not in one direction or another, and we aren’t at the point where anything is absolute, and regardless of if that time comes or not, we mustn’t lose sight of the hope that we have for so long harbored. Not now, and not ever. I also understand that this is by no means an easy ask of everyone, in fact finding it within us to hold onto hope just might be the hardest thing we’ve been tasked with as a team, and maybe the hardest thing any team has been tasked with, all things considered. But should we stay steadfast and true to the values we’ve upheld thus far in our time spent together, then we’d not only prove that hope in the face of adversity is attainable, but that the self-sacrificing spirit of those who do good can never truly die, which I find all the more empowering as someone who aims to good myself. So I intend to wake up every day with a hopeful state of mind, and I intend to train, and I intend to work to do my part to make this summer happen, because if fate starts to smile upon us and things go our way and we aren’t ready to serve those that we promised, I’ll never forgive myself. But even more so, I keep fighting for this ride because I want to prove to everyone else, even if they’re not listening, that I didn’t give up, and that Texas 4000 for Cancer isn’t in the business of giving up, not until the bitter end, however that end may unfold for us.

And so I ask, are we to be those who offer up hope so willingly to others but choose to save none for ourselves? Are we so spent that we’ve become bankrupt of that which we aim to one day instill in others? I don’t think so, but it’s up to us to prove it. After all, a world void of hope is one that I quite frankly wouldn’t ever want to live in, and I’ll fight like hell to do my part to make sure that there’s always enough of it to go around. And I believe everyone here is of like mind.